A Week In Maryland

Its been a busy past week with me back on the east coast again. I was invited by the University of Maryland to speak at a symposium on satellite technology. There
were a handful of speakers talking about the significant things being done through satellite technology. I was there to talk a bit about my trip andhow the system worked for me, putting a bit of a personal touch on rescue technology. 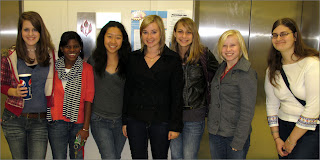 U of Maryland Engineering Students
We spent the day walking around the campus there. It was so big! I've seen some big college campuses, but I think that was the biggest so far. I really liked it there and while we spent most of our time with the engineering students, I wish I had time to check out their psychology program, since that's what I would like to major in. The people there were all great and even though engineering isn't one of my strong interests, I had a great time meeting the friendly people there. 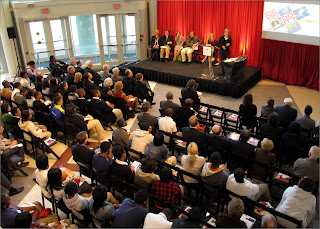 The first night that we flew in I had dinner with a bunch of young women engineering students at the University. The next day we spent touring as much of the campus as we could in the few hours we had, and then set up for the symposium that was going to be later that night. I was getting a little nervous as the room started to fill up. I only had to talk for
20 minutes and I had definitely spoken in front of more people before, but I guess stage fright isn't an easy thing to get over.
Anyway, after talking for a little bit it got easier and fun, as always, and the night went pretty well.
After everyone spoke we went and had dinner with a bunch of people from the school. It really turned out great! Thanks to everybody there for showing us around! 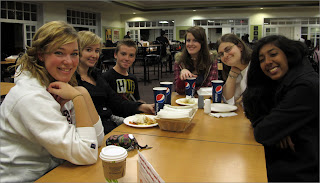 I traveled this time with Bill Bennett and Scott Lurie from my technical team and my brother Toby, who turned 13 while we were out there. We covered a lot in the week we were there, but that's it for now, gonna save the rest of the trip for my next few blogs! :)
Abby 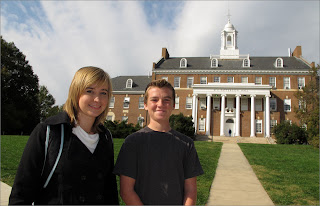 Posted by Abby Sunderland at 8:05 PM