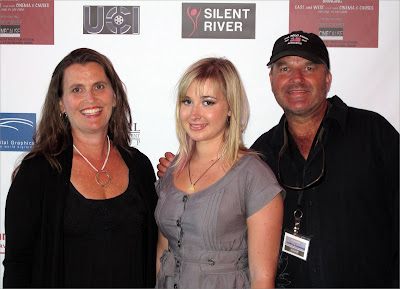 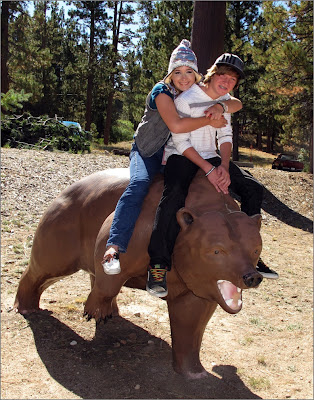 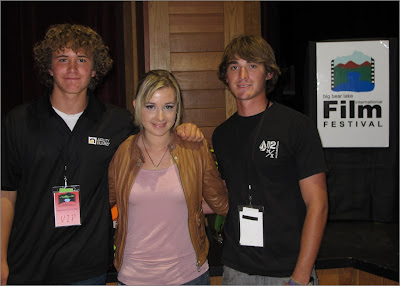 Jordan Romero, me and Zac
Photo courtesy Bill Bennett, ASC
I swear Jordan has grown a foot since the last time we saw him last summer. Later on in the afternoon came the awards. Jordan, Zac, Me, and a few other guys were presenting them and it all was just a lot of fun. We were taking our turns presenting awards and I thought we were finished and was heading out of the room when all of a sudden someone said "Wait Abby you're back up!" So out I was on stage with an award and a microphone in my hand... probably should have been paying closer attention to what they were dong on stage! Lucky for me the guy left his notes on the stand!! So it turned out that Wild Eyes won the Peoples' Choice for Best Documentary!
Life really seemed to be falling back into an actually normal normal. I mean not just my kinda normal, but a typical 17 year olds' normal. Everything that happened on my circumnavigation attempt is so long ago now that I barely even think about it anymore. I'm just a 17 year old girl, going to college, hanging out with friends, doing everything that I should be.
I was sitting out in the lobby and watching as everyone came out of the theater. It seemed like everyone was teary eyed; old guys, young guys, grandmas and moms. Then a little old lady came up to me crying. She hugged me and said that her husband froze to death a year ago. She said that that was her rouge wave and went on to say how my story had inspired her and that she knew that she could make it through this.
At that point I think my eyes started to water a bit, and it takes a lot for that to happen. To me, my story might seem like old news, but to some people it's a story of hope, and courage, and to see how many people were moved by it made me do a double take on me and my normal life. Maybe it shouldn't be normal, because if my story was able to encourage that sweet little old lady then I want to make sure everyone that needs to hear it does.
And as if just to confirm that, back at school on Monday, just sitting outside waiting for my class I ran into a guy waiting for his ride. A perfectly normal guy, you never would have guessed he was a basketball player with 50 scholarships who recently dislocated his shoulder, losing all of them, and moving out here just four weeks ago because of his dad's work.
So that's life; rough times come, rough times go. As long as I'm around I'm going to do my best to give people hope that things will get better because, you know, they always do even if they have to get a little worse first.
Now, back to the math homework!
Abby
Posted by Abby Sunderland at 4:30 PM 11 comments:

Things have been going well over here with the book and documentary. Wild Eyes, The Abby Sunderland Story (the name of my doc) has been accepted into a few different film festivals and was nominated as best documentary in the Silent River Film Festival. We'll find out if it won anything next week. You can watch the trailer for my doc and buy a copy at my web site at www.abbysunderland.com.
We'll also be out in Big Bear at the Big Bear Film Festival this coming weekend. I'm really looking forward to that one because they have a whole side bar of young adventurers, including my brother Zac Sunderland, Jordan Romero and me. Jordan is the guy that climbed Mount Everest when he was 13 and of course my brother sailed around the world the year before me.
You might remember awhile ago Zac, Jordan, Joseph Machado, and I all got together in Big Bear and hung out for the day. It will be good to see them all again. So, if you're out around Big Bear this weekend, stop by and you can see all of our docs, meet some awesome people and have a fun time hanging out in the beautiful mountains there. The Young Adventurers Sidebar Showcase is on Sunday.
Go to http://www.bigbearlakefilmfestival.com/page.php?13 for more info. 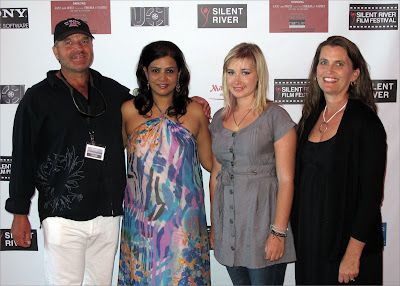 My dad, Kalpna, me and mom at the Silent River Film Fest
Photo courtesy of Bill Bennett, ASC 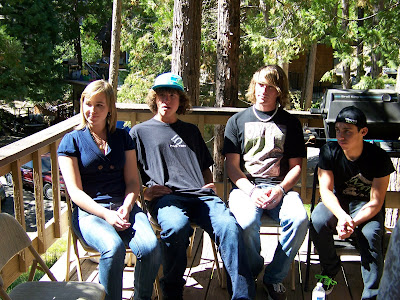 Me, Jordan Romero, Zac and Joey Machado - Big Bear 2010
Tonight I am speaking at the Pacific Singlehanded Sailing Association in Marina del Rey. It should be a great time taliking to sailors and ones that know a lot about what my trip was about.
Next weekend I will be at the Norwalk Boat Show in Norwalk, Connecticut on Saturday and Sunday. Then it is back to California and back to school. Life has been busy but I am loving it!
Abby
Posted by Abby Sunderland at 4:14 PM 8 comments: