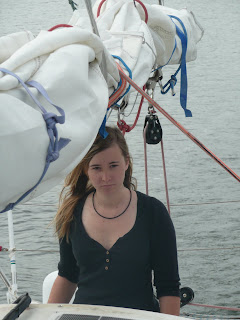 for ourselves whether or not it really was dying down, but it was getting late, and we were begining to worry that we might not be able to make the ship in time. We got towed out by Vessel Assist because the current and waves were too much for Wild Eyes' little engine. We tried to sail but with the conditions being wind on the nose and the Gulf Stream against us we weren't making enough headway. We decided our best bet was to give tacking a shot, but it didnt work out quite as nicley as we had hoped.
Now tacking isn't a bad thing and often works fine but we were hardly able to make any head way. we were tacking every 15 to 20 minutes and were going at top 7 knots. We began to realize that we wouldn't be getting much sleep that night. I can safely say that was one of the hardest parts of the entire trip. 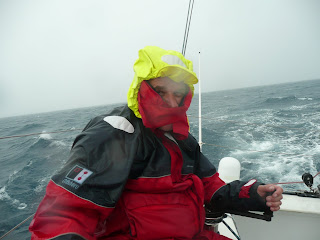 The night dragged on forever, but eventually it did start to get light out. We were all exhausted and had come only 40 miles. We decided to pull into West Palm Beach. In order to run the auto pilot we had to use the engine for charging. But that had broken down during the night. It turned out we had gone over a lobster pot. The marker on it was a little stick which would have been hard enough to see during the day let alone at night! It had wrapped itself around the strut and shaft and actually broke the strut. We couldn't do anything about it where we were so we would just have to be towed back out when the weather changed. It was great getting to sleep, though I don't remember falling asleep... just waking up at 6 the next morning with Vessel Assist there to tow us out.
That day was amazing and a great way to end the trip! We had about 10 knots of wind and were making about 8 knots boat speed. We went just as far as we had the entire day before in only a few hours. The auto pilot had broken, but it was such a nice day out everyone was happy to hand steer. We pulled into Fort Lauderdale Thursday afternoon, still a little tired but pretty happy with how the whole trip had gone. We had been under a lot of pressure to get Wild Eyes to Fort Lauderdale in time to be loaded on the Marie Rickmers for shipment to Ensenada. If we had missed the ship, my trip would have to be postponed.
Zac left us that afternoon not too long after we got in. We all (my dad, Mike Smith and I) spent the night in a sma 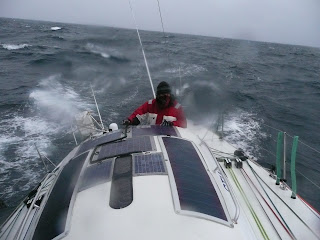 ll hotel room that night, and I was luckily allowed to sleep on the boat for the rest of our stay there. We got a lot of much needed work done. We replaced the solar panels, fixed the strut, got every thing ready so that when she gets dropped off in Ensenada I can hop on and take her right up to Marina del Rey.
The whole trip was an experience, we had some great weather, we went through some hell, plenty of things broke down, and we had some fun; just what you want in a shake down trip. All in all it was a great trip. We put the boat through a lot, and all of us learned so much about handling her. I am more confident then ever that WIld Eyes and I are up to the challenge of sailing around the world. -- ~♥A♥~
Posted by Abby Sunderland at 2:16 PM