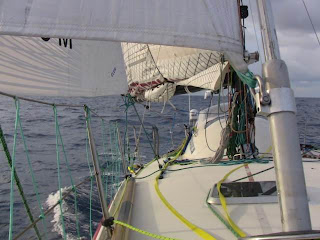 From the bow of Wild Eyes 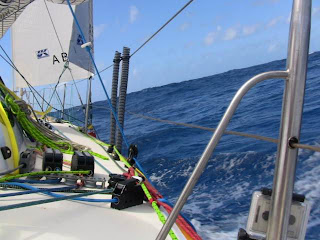 Today I called home in the morning as usual but this time everyone sounded more than a little worried. While I was talking to my mom, my dad was on the phone with the Coast Guard. They Had recevied a lot of calls from people who were worried about the tsunami. They were calling to check my position to see if I was in any danger. They were pretty concerned and said that I was right in the middle of where they were expecting the tsunami to go. The guys at Commander's Weather assured us that I would not be in any danger but it was a good reason to just go over everything on the boat since the boat is not heeled over as much as she was earlier this week.
I went over the boat and made sure everything was ready just in case, but in the end, I didn't even get a big swell. I am almost three thousand miles off shore so it wasn't very likely for me to have felt anything at all. With the tsunami behind me now, my main worries are my genoa that's chafing on the pull pit. But even that isn't a serious problem. All I need to do is pull out my sail repair kit and put a patch on it.
Other than that every thing is going extremely well out here. Last night my wind started to die down quite a bit, and I was starting to get a little worried but it picked right back up this morning. The wind has shifted around more from the east, so I'm at a very comfortable point of sail and making great time!
So I'll be keeping Chile in my prayers and also praying that the tsunami doesn't do too much damage where ever it does hit.
Abby 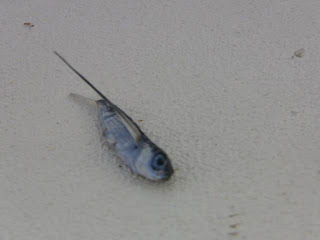 A miniature flying fish. This is for the blogger that was curious about my visitors :)

Posted by Abby Sunderland at 7:20 PM