Heading South and a Bit East! 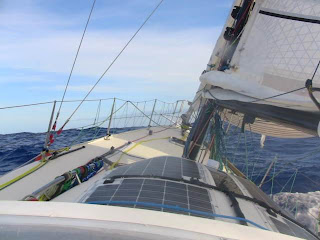 A bit of wind!
The winds shifted around so I've stopped heading SW. I can now head SE which is a big relief, I was beginning to get worried about running into New Zealand sometime during the night! Well, I'm not really that close to New Zealand, but it feels good to be heading more directly towards where it is that I'm supposed to be going.
The winds also picked up to a nice 15 knots. I'm finally moving and going at a steady 8 knots. The past few days I had been going about 4 knots which isn't exactly standing still but 8 knots is the kind of speed where you can look at the speed gauge with out feeling depressed!
It has gotten really cold out here recently. It must be all the cold fronts that are around here bringing cold air from down south. Last night it got down to 70 degrees! Seventy degrees probably doesn't count as "really cold", but I did have to put a jacket on! Its been really nice having it so much cooler out. Its made everything a lot easier including blogging. It had been so hot and miserable down below that I just ducked down below to write my blogs real quick and then was back outside dumping buckets of water over my head! With the cooler weather I've been able to spend a lot more time down below now, and its been nice.
Most everything on board is working at the moment, so I haven't had a whole lot to do. I've been working with Scott, from my team to try and sort out some small auto pilot problems, going over every thing everyday as usual, and tossing the occasional flying fish back into the water.
I still haven't had any luck fishing and I really haven't seen any sea life. I'm a little surprised by how little sea life I have seen so far. When I first left Marina del Rey, hardly a day went by without having dolphins playing around the boat. Around Cabo I saw a few whales but since then I haven't seen a thing. I do know that there is something out there, as I am on my third fishing lure! 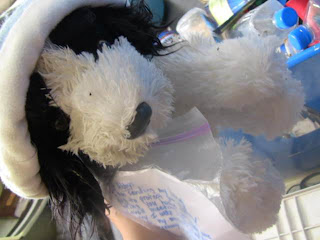 Picture of Mr. Doggie: Mr. Doggie was given to me by Jimmy the day I left Marina del Rey to keep me safe on my trip. He's done a good job of it so far! :)
Posted by Abby Sunderland at 7:50 PM