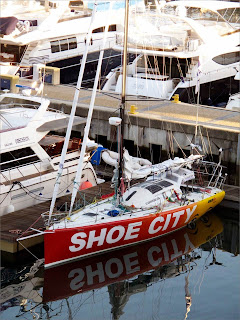 Repairs are going well. The new auto pilots are working very well and this time they are the type that can have two heads attached, one inside and one outside. It will help a lot not needing to run up and down everytime I set it. We also put the auto pilot brain boxes in a place a little easier to get to so I won't have to crawl into the depths of what has affectionately become known as hell, or should I say unaffectionately? (the small compartment in the back under the cockpit) Even if I do have to pull them apart, put them together, switch everything back and forth, re wire, or whatever problem might occur with the new two pilots, at least I will be able to see what I am doing. 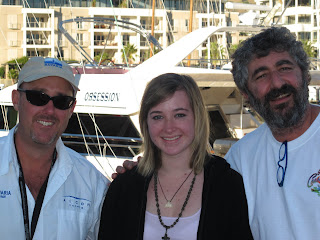 Erik Bjerring, Me and Scott
There are new DC lights everywhere so I should have better lighting for the times I am up at night. Of course now that I know how to do just about everything with my auto pilots and now that things are set up a little easier to get to they will probably work fine. 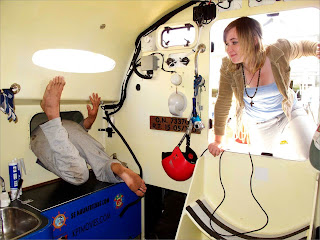 Fiberglass repair to water ballast!
The wind generators are both on the back and are working well. They are a little different from my last ones, they put out better amperage in lighter wind, and from the looks of things the blades are a little bit stronger. They don't get so thin at the end so I hopefully won't have to worry about the blades breaking so easily. 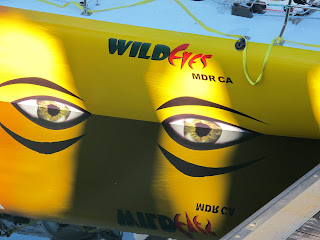 Wild Eyes gets a new eye
I'm sorry I haven't written much while I have been here. As nice as it is to be on land for the time being, it's not at all a vacation. We're all pulling hard to get things together and get me back on the water. I had planned to leave this morning, but as things turned out, my dad and Scott had a 20 hour lay over in Johannesburg, so they just changed there plans and are now leaving late Friday. Now I will be leaving early Friday.
Yes, I do know all the superstitions and about how you're not supposed to leave on a Friday, but as things are right now waiting a day or two to get out of here could bring a whole new set of troubles weather wise. I know that a lot of people have been worrying about my next leg with how late it is in the season.
But hey, people said I wouldn't be able to get around Cape Horn because it was getting late in the season. It is about picking weather windows and knowing ahead of time about fronts that are forming so that I can alter my route to avoid them. I may not be able to avoid everything but with my weather router and Wild Eyes' speed I should be able to avoid the majority of really bad weather.
I will stop again if I need to but I'm not racing out here. I'm taking things slowly and if I can avoid bad weather, I will. Wild Eyes has been around the world before, she's been in 60 knots, she's been knocked down, she's a great boat and as safe as they get. As long as I stay on her, I'll be safe as well. The next leg is probably going to be harder then any thing I have done so far in my trip, but I am ready for it and so is Wild Eyes.
Posted by Abby Sunderland at 8:18 AM